Baby Boomer Toys – Then and Now 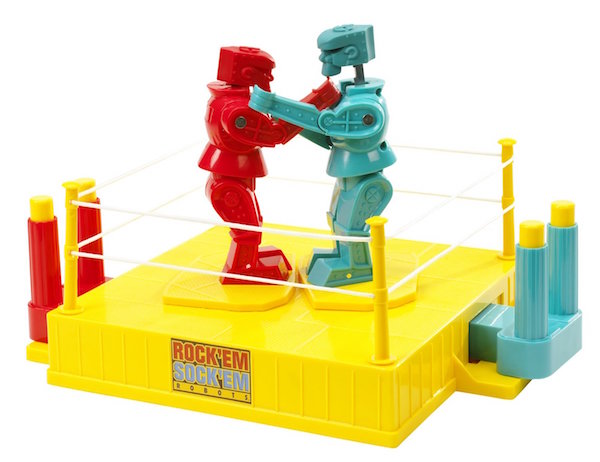 Baby Boomer Toys – Then
I’m thinking back to one particular holiday season; oh, it must have been about 1959, which would have made me about six years old. My younger brother and I were two little Jewish kids (whatever that meant) and we used to hang out with Ricky, the kid up the street who was Christian. This was the year we discovered the difference between Christmas and Chanukah.

So, we’re standing in the  breezeway between our house and the house next door, the day after the first night of Chanukah, explaining Ricky how we get a present every night for eight days and sharing our Chanukah gelt with him. Chanukah gelt, of course, is delicious chocolate money wrapped in gold foil to look like coins. Chanukah came early that year, so Ricky still hadn’t gotten ANY  presents yet, however, Ricky didn’t seem too concerned or impressed by our gelt. Still, we felt kind of bad for Ricky because his holiday only lasted for 24 hours. Poor kid.

The next few nights went by and we continued to rake in the gelt and some really cool presents. Dad got us a new transformer for our little Lionel train set which fascinated us as it sent the little train cars choo-choo-ing around the little track in circles.

Oh and we each got a wooden paddle with a rubber ball attached by a rubber long rubber. We used to love those, until we discovered the real reason mom and dad bought them. They loved those paddles almost as much as we did. Because once that  band snapped, the paddles were useless to us kids. But my folks were just beginning to get use out of them, which we found out the first time one of us kids misbehaved. 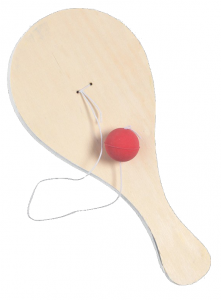 We also each got a Slinky and an egg. Inside the egg was this amazing substance called Silly Putty. I saw on the commercial how you could “break it like a biscuit” or stretch it out like taffy, bounce it higher than a rubber ball, but the property I couldn’t wait to try out was how you could flatten it out and press it against an image in the newspaper and it would lift the image right off the page. Of course the first thing I did was to try it on Dick Tracy’s face and stretch it all out of shape. Yeah, we sure were easily entertained. At least we were until Christmas Day.

We had never been in Ricky’s house before. So wen we entered is parents house that lovely Christmas morning, it was like walking into another dimension. There was a big tree with tinsel and all kinds of decorations and an angel light on top. The whole house smelled like a bakery, Ricky’s mom and dad were all smiley and they greeted us warmly as we followed Ricky down into their recreation room to see his presents. Oh man, did I stop feeling bad for him in a hurry.

In the center of the room was a bigger train set I than I could have imagined. It went in a figure eight, and there was a train station with a stop light and little people figures of passengers, and a little engineer guy. Fake snow, fake grass, a fake pond. Turns out this was form LAST Christmas.

So then he shows us the new stuff. Silly Putty and a Slinky were just for starters. He got an electric football game that vibrated when you hit the switch and the players would move.He got a race track and race cars, but what we were most in awe of… yup, you guessed it. Rockem Sockem Robots!!! RIcky, you lucky little #@%@^ 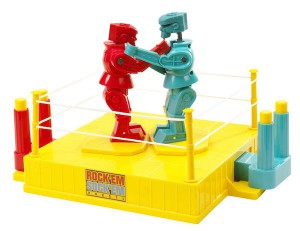 Oh, did I mention Ricky had a sister, Catherine?  Naturally, She got a Chatty Cathy doll and an Easy bake Oven. This was all in ONE day. That was the last time I ever bragged about having eight days of anything.

So recently, I got to wondering about baby boomer toys – then and now. Which toys were popular when I was a kid are kids still playing with today (I’m talking about the ones they are still manufacturing, not collectors edition. They will be the topic for another time).

So far, I find you can still get a lot of those toys. Some are exactly the same, others have evolved over the years, like the Barbie Doll. They still have G.I. Joe. You can still find Slinky, Silly Putty, Chatty Cathy, Rockem Sockem Robots.

Now, I pose this question to all you parents and grandparents who have shopped for kids lately: What were some of your favorite toys growing up and of them, which are still popular with your children and grandchildren.  Comments are welcome and, in fact, encouraged!