Stop Snoring – Save Your Relationship -Save Your Life

Stuff for Baby Boomers > Health - Mind, Body, Spirit > Stop Snoring – Save Your Relationship -Save Your Life 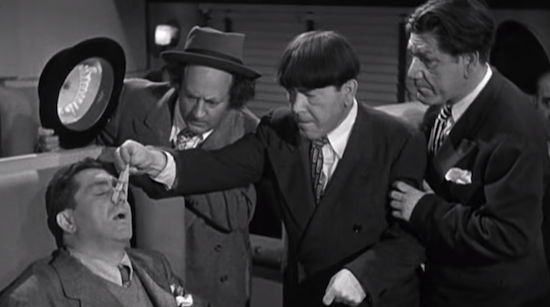 I decided to write about snoring recently, while talking with a friend of mine who happens to be a nurse, I mentioned that I had launched this website dedicated to “stuff for baby boomers”.  This led to me telling her about the tight relationship I had with my Squatty Potty, due to issues with my colon. Which led me to ask, “What other things she might suggest that would be relevant to baby boomer health, mind body and/or spirit?  Without missing a beat she answered, “CPAP”. It seems that in her experience as an ER (Emergeny Room) Nurse, it she’s seen many case of heart attacks lately, due to a serious condition known as sleep apnea. Sleep Apnea is a very common disorder which occurs primarily at night by causing interrupted breathing. This period of interrupted breathing may last anywhere from 3-10 seconds. Overall, sleep apnea is more commonly seen in individuals who are overweight but sometimes may be seen in thin individuals with abnormal anatomy of the throat. 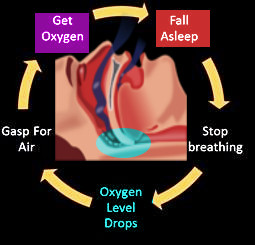 Of course, not all snoring is indicative of a condition as serious as  sleep apnea. Almost everyone can tell you of a with the family member or roommate who keeps the entire household up all night with loud, excessive snoring. Perhaps you or someone you know has been kicked out of the master bedroom by their significant other over it. But there are so many facets to snoring, I had no idea until I began to write about it. For one, there are several different types of snoring, and they have varying degrees of consequences. From mild snoring to life threating, and a few in between. Here’s the deal… If you or someone you know has a snoring problem, you need to deal with it before it becomes a treat to your relationship or your health.

Snore? Who ME? I Never Snore!

How do you know if you snore? After all, since you’re asleep while you’re doing it, you have no clue, now, do you?  And if you are the one being kept awake at night, how do you convince the other person that they have a problem. Every time you bring it up, they deny it or simply  won’t believe you. Fortunately, there’s an app for that. It’s called “Camera” and it’s on your smart phone. There’s also “Voice Recorder”, but they might think you faked it by fake snoring yourself. So you see, this is most assuredly a job for your built-in camcorder! Hey, as long as you’re already awake, you may as well do something productive!

How Bad Is It?

Okay, so now that you have this recording that there’s some serious snoring going on, let’s examine the audio and determine what level we’re at, if it’s treatable, and what to treat it with. 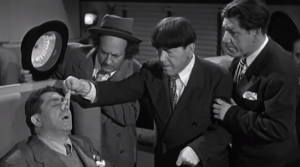 One way to keep someone from snoring

Level One: A couple snorts now and then. Intermittently. No serious health risk. But obviously, you found it annoying enough to be awakened by it and felt compelled to record it, so you’ll want to consider at least a clothespin to the nose, like in the Three Stooges episode, Hold That Train, where they used it on Curly.

Level Two: Allergies. Snoring, caused by allergies is seasonal, and the degree of snoring is directly proportional to the severity of the allergies. Fortunately, this being seasonal, you usually only have to deal with it once a year for a while and you can take OTC or prescription medications to alleviate the problem. If the snoring is really a problem this time of year, you may be relegated to the another room, the basement, the garage or a camper trailer parked in the driveway for a few weeks until it blows over.

Level Three: Deviated Septum. Okay, I’m sure you nose-pickers know what a septum is. It’s the cartilage in the middle of your nose on the inside that sits between your nostrils. You’ve felt it a million time when you stuck your finger up there. Well, sometimes, the septum blocks one side or the other. This could be due to a number of things. A punch in the nose, you were dropped as a child, it can even be as simple as it runs in your family – simple genetics. Besides snoring, if you have a deviated septum, you may also experience frequent sinus infections and nosebleed. If you suspect you have a deviated septum, you should see an Ear, Nose and Throat doctor. There are a number of over-the-counter remedies to alleviate the problem. If you have a deviated septum, chances are, you snore pretty loud at times, so if you want to keep your partner happy, and next to you in bed, you’re definitely going to want to consider trying something outside of hoping it will stop on its own. It won’t.

Level Four: Obesity. Snoring due to obesity can be controlled in many cases by addressing the weight issue. Diet and exercise is all you need to put  an end to the problem. But for many who fall into this category, it’s not that simple, because it requires changing the mindset; having self discipline and support from your family, friends and other members of your inner circle. You might enlist the help of a nutritionist and/or a personal trainer. You need to change the way you think about food, nutrition, excersise and in essence, a complete change of lifestyle. However, if you do manage to get your weight under control, chances are you will snore a lot less or not at all.

Level 5 (Def Com5): Sleep Apnea (you’re in deep doo doo) One in five people experience at least a mild form of sleep apnea, and records show it to be more common in more men than women until age 50. After that, the ratio is about the same. Obesity is also a factor. The more obese one is, the more severe it’s likely to become. Sleep Apnea is also about two and a half times as prevalent in African Americans. It’s usually caused by weight on the upper chest and neck blocking the flow of air. There’s another type, called Central Sleep Apnea, but it’s far more uncommon. Central Sleep Apnea is where the brain is not sending the message for you to breathe during sleep. So you simply stop breathing until you unconsciously start gasping for air in your sleep. It’s quite  frightening to watch  and extremely dangerous to allow to continue, once you’re aware that you have this condition. Individuals suffering from sleep apnea tends to snore quite loudly and at some point will ultimately complain of excessive fatigue, even though they’ve had a full night’s sleep. In most cases, couples end up sleeping in different rooms because of the snoring, which can be loud and very disruptive. Sleep apnea is classified as obstructive sleep apnea and central sleep apnea. Obstructive sleep apnea is many times more common than central sleep apnea. There are a few patients who have a combination of these two.

How is the diagnosis made?

In most people, the diagnosis of sleep apnea can be made on the clinical history and physical examination. Sometimes if the diagnosis is in doubt, one may be required to spend a night in a sleep laboratory to confirm the diagnosis. Many strides have been made recently in the study of sleep, sleep apnea and related condition

How is sleep apnea treated?

The treatment of sleep apnea is not easy. There are hundreds of therapies for sleep apnea and unfortunately most do not work well. The chief reason why most treatments do ot work is that the patient does not decrease his or her weight. Most cases of sleep apnea are initially treated non-surgically and involve a change in lifestyle such as losing weight, becoming more active, discontinuing smoking and sleeping with the head of bed elevated. These simple measures can help relieve sleep apnea in more than 50 percent of cases. When sleep apnea is moderate to severe, one needs the use of sleep apnea devices like CPAP or continuous positive airway pressure. CPAP devices work well and will help to open blocked airways in the mouth and throat.  There are many styles of CPAP masks. To use the device, one wears a tight fitting mask over the face during sleep. Oxygen is then delivered under pressure and this helps to keep the large airways open. The down side of CPAP devices is that they take some getting used to and they’re expensive if not covered by insurance. Fortunately, insurance  often does cover CPAP devices. According to the American Sleep Association, prices range from 200 to 3000 dollars. With the average being about $850. Surgery is never the first choice treatment for sleep apnea and is only undertaken when the most other measures have failed. In general, if you are ever told to have surgery for sleep apnea, you may wish to seek a second opinion.