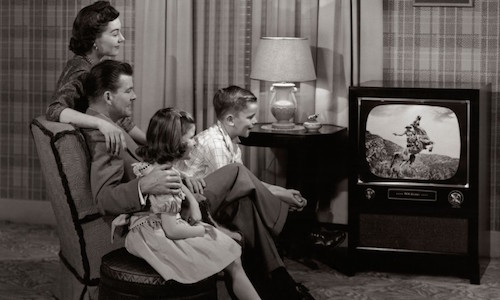 They say a successful website has to have a color theme. At least that’s what I recently read somewhere. But while deciding on what color a theme about baby boomers should be… when trying to decide what my “target audience” looks like, it became clear to me that  baby boomers can’t be pigeonholed that easily. We’re the generation that experienced the transition from black and white to living color. Literally. Figuratively. Politically. So I created a collage with a rainbow tie-dyed background and added just a few of the icons that represent the millions of americans born between 1946 and 1964.

Me personally? I was born in 1952. I was about 10 when the Beatles hit the American airways and 11 when they
first appeared on the Ed Sullivan show and completely screwed up my life in the most fantastic of ways. Once those floodgates were opened, they were immediately followed by an onslaught of bands from the UK; The Rolling Stones, The Who, Hermans Hermits and others who wreaked havoc on my impressionable young psyche.

The pages throughout this site are littered with stories, anecdotes and guest posts… mostly about growing up in the 60’s and 70’s. The music. the movies, the television and kitsch that we baby boomers look back on with fondness, nostalgia, some embarrassment and some regret, but mostly the good things. There are numerous sites for boomers who want to learn about how to save for retirement, deal with end of life decisions, basically, how to get ready to die. Well, this site ain’t that. As in the immortal words of Don Henley: “I will not go quietly. I will not lie down”.

So you see – THIS site is for the LIVING. Or perhaps I should say, “RE- LIVING.”  As the announcer on The Lone Ranger used to say, Let’s “…relive those thrilling days of yesteryear”. Or as Paul McCartney sang, “Yesterday, all my troubles seemed so far away…”

Ultimately, this site’s not just stuff for Baby Boomers. I don’t presume to believe that our generation is the so-called “Greatest Generation” Oh, wait, the “Greatest Generation are actually the parents of the Baby Boomers. Yeah, actually, they were pretty great. They’re the ones that walked 5 miles back and forth to school in a hurricane, and when they were bad, their papa took ’em out behind the woodshed and spanked them with a hickory switch. We Boomers had much, much better. We were picked up by a big yellow school bus and when we were bad, we got paddled by Mom.

The subsequent generations that came along after us think that we are responsible for screwing up the entire planet for them before they were old enough to have a say in its care and feeding. I personally believe that’s due to a class thing, not a generational thing. What I do think we had was a cultural revolution that manifested itself in the music and arts of our time. The current generations were born into a digital age where connectivity and production is key, hence, the most amazing tools are available for creating visual and aural content that is unsurpassed. However, the Baby Boomers bore witness to a Renaissance in creativity and cultural upheaval, that resulted in originality in music and art not seen since the actual Renaissance Period. Therefore, everyone is invited to explore these pages and see what the Baby Boom era brought to the table.  The sixties, much like the  20-teens, were a very turbulent and divisive time as well as a cause for celebration. Keep in mind, the focus is more on the causes for celebration. You can find bad news anywhere else on the net. Consider this a baby boomer oasis.

Some of the best archives available featuring music, tv and movies from the 50s, 60s, 70s are the Time Life CD and DVD collections, including Classic Rock, Treasury of Folk, 60’s Music Revolution, Pop Goes the 70s, The British Invasion, The Motown Era, and many, many more.  Check back for updates. Better yet – fill in the Contact Form on the right and get on the list!

DISCLAIMER: Some links within this site are affiliate links. This will not affect the price of any of the items, but will help to generate money so i can continue to publish and maintain this site. I am also a member of Wealthy Affiliate and proud to be a part of their wonderful community of ethical online marketers and merchants. Thank you – Hal