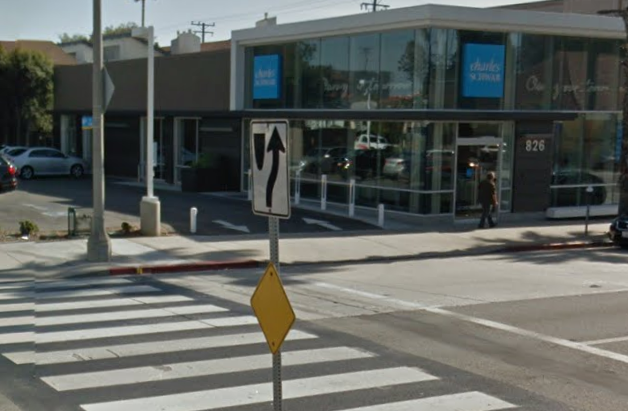 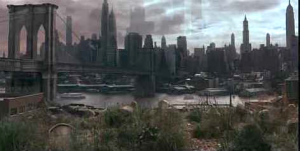 There is a remarkable scene at the end of the Martin Scorcese film, “Gangs of New York”. It depicts a small cemetery, ensconced by weeds that cover the head stones of some of the characters that once populated a once colorful, ultraviolent, operatic time and place;  peopled by an array of characters immersed in situations so unbelievable, unfathomable, even sometimes hard to watch, and always fascinating. As the camera pans away from the cemetery, the next thing you know, you’ve been wisked away to a much broader view of New York’s Five Burroughs and beyond.  What loomed so large for nearly three hours on the big screen is now lost in the gigantic urban sprawl that sprang out from the seeds of that era.

If you go to the corner of 9th Street and Wilshire Boulevard in Santa Monica, California today, there is an office building. Before that, for a short time, it had also been home to a fish and pet supply store and before that, a vintage car dealership. 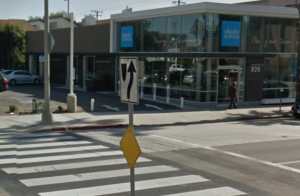 But what preceded those mundane facades was a building that truly had magic in it. Some referred to it as “the Disneyland of Restaurants”. If there is ever a movie made about the Great American Food & Beverage Company era, it’s founder, Neil Poppy Morgan, the people who were the music and food churning machinery and all the fun, the madness the decadence, the sex, drugs and rock and roll, the love, the joy and the crazy wonderful memories that took place at 9th & Wilshire, I would hope it would be by Martin Scorcese, because I know he’d capture it all pretty accurately. 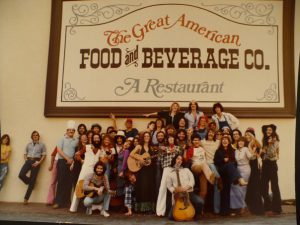 So… As I Was Saying

There I was, on a makeshift bed in the corner of DJ and Sue’s living room. I can’t completely recall what it was I was sleeping on. I think it was a soft, cushiony, dark brown couch; not nearly as comfortable as the nice firm mattress I left behind in my parent’s house. Waking up in California almost made up for it except fro one thing. it was raining, and it wasn’t going to stop for almost a month.

After we had all awoken more fully, I was able to get a chance to meet Sue, a beautiful girl. blond hair, perfect tan and flawless figure. She was the epitome of the California girl the Beach Boys sang about.  DJ sure knew how to pick ’em. Spoiler alert: He still does.

Luckily for me, DJ and Sue both loved to cook and they had lots of food in the house, so we ate and talked a lot those first few days. But who remembers what we talked about? Who even cares? This is about the Great American Food & Beverage Company, so let’s just get there already, shall we?!

My first visit was more of a reconnaissance mission. DJ was off one evening, so we just went there to sit at the bar and observe the  place. I don’t even think Greg, the manager was there that first night, so I was just there for a taste. Thing is, you didn’t just “taste” the GA. It kinda got shoved down your throat. I’ll elaborate more later. But for now, I’ll let you read this description by Doug Boyd, one of the first singing waiters I befriended there. Today, Doug is a professional voiceover artist and VO coach with an impressive resume of tv ads and movies*.

Doug Boyd’s Depiction of the Great American F& B Co.

“This was a hip, noisy sprawling eatery in an affluent part of Santa Monica, about ten blocks from the beach on Wilshire Blvd.  Their matchbooks and menus bragged that they were the “World’s Most Unique Restaurant.”  I saw their point!  As  I shouldered my way into the packed foyer early one weekend night, I found myself suddenly At The Circus.  Well-heeled patrons pressed for tables, glamorously festooned hippie chicks with bright smiles tucked over-sized manila menus under their bare tanned arms, disappearing into the haze of clattering flatware and rambunctious live music.

The atmosphere had certain elements of Disneyland’s Main Street, in that the men all wore knickers and old newsboy type caps; old-fashioned sconces on the wood paneled walls suggested oil lamps; and various paintings along the walls were of Edwardian high-collars-and-corset subjects.  The fonts on the menu announced the daily fare like an old newspaper broadside as well, with the kitschy Sgt. Pepper “Traveling Medicine Show and Soothing Elixir” vibe.

The portions were enormous.  Long oval plates piled with beef ribs, corn-on-the-cob, rice, and over-sized slices of fresh fruit; or brontosaurus-sized green salads in big wooden bowls.  The Alpha Item on the menu , The Feast, was served, depending on the number of guests, on long wooden planks hustled to the tables, bedecked with whole pineapples, steaming victuals and excess.   I don’t know how people finished these portions, but they did, going on to consume equally decadent desserts, the most notorious being the Ice Cream Orgy.  A big range of teas, espresso drinks, and stir-fry vegetables hinted at the dining trends to come in the coming decades.  The hippie, health-driven vibe was in evidence, despite the emphasis on the carnivorous entrees.

There were two big, richly appointed  dining rooms, each with perhaps a score of dark wooden tables, and thick carpeting which helped mute the noise.  On one end of the bigger room was a ten foot lit-from-behind faux stain glass window.  In the northern room was a long soda-fountain bar with black leather upholstered stools, ending at the spotlighted piano.  It was here that a ruckus coalesced  every fifteen minutes or so- shaggy waiters-turned-musicians howling doggerels, hammering on acoustic guitars or waving tambourines to the delight of the crowd.  Fiddles might appear, a saxophone might join in, and perhaps a gypsy dance by a waitress would round things out.  Organic and spontaneous.  From painfully out-of-tune, on up to unplugged acoustic joy!”

So, YEAH! This was gonna be great! I could hardly wait to meet Greg, the manager and get started (Peter, who Doug mentioned was gone by now). I was so excited and nervous at the same time. I had never waited tables before. And the last time I sang in front of strangers was at an open mic in Center City Philadelphia when DJ and I performed together at the Cafe Ehrlanger (See Part 1).  Oh.My. God! Supposed I sucked? Suppose there were 10,000 wannabe rock stars better than me who were auditioning for this job? This shit was about to get real.

*Check out Doug Boyd’s website to see his resume, photos and video clips at:
http://www.boydcall.com/

Also on the web… A very detailed depiction of life as a singing waiter at the GA by musician and author, Barney Saltzberg. Read it here:  Memoir of a Singing Waiter