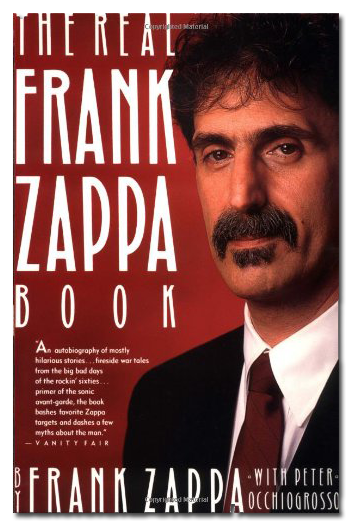 absolutely free, frank zappa, only in it for the money, the real frank zappa book review 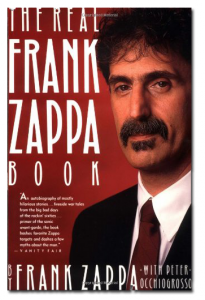 I’ve been seeng the name Frank Zappa a lot these days. On TV, on Facebook, and his name’s even popped up a few time in my conversations lately. Which prompted me to write this review of his book and relate a chance encounter I had with him shortly before he passed away.

I was working at Jerry’s Famous Deli when a chance meeting with the man himself transpired. And coincidently, I had just finished reading his autobiography. Apparently, there were so many books and articles written about Frank Zappa and the Mothers of Invention, and the myths that sprouted around him and the band, Frank felt compelled to set the record straight about his life, music, opinions and politics once and for all. In his own words. In his own book.

For the record, it’s one of my favorite reads. Though his writing is infused with some underlying, even overt- bitterness and frustration stemming from a relentless onslaught of stupidity and ineptitude throughout his life eminating from people in authority,  including record company executives, law enforcement, and ultimately, the U.S. Senate in his famous face-off with the Tipper Gore and the PMRC over censorship, it is howlingly funny at times. Zappa’s humor infused  with biting sarcasm… is unsurpassed.

In the Real Frank Zappa Book, Zappa’s description of people and events that inspired many of his songs is hilarious. And… if you happen to be a musician, it’s a must read for the sage advice he offers to members of your tribe, alone.

The book also includes some of his original drawings, too. In fact, some of the pages remind me of my own notebooks – I used to draw, scribble and doodle on the pages of my notebooks all the time back in elementary and high school. These sketches serve well to enhance Zappa’s intelligent, humorous and perceptive writing, and I think almost anyone, whether you’re a super fan or have never even heard of the guy, will embrace the wit and wisdom extolled by the inimitable Mr. Zappa.

But, the most striking thing was toward the end when he wrote candidly about his home life. And this is when it became very real for me –  in real life.

As I said earlier, I was working at Jerry’s Famous Deli the evening I met Frank Zappa. And I had only recently finished reading The Real frank Zappa Book. Now, ordinarily, I made it a point to never, never, ever approach celebrities at work. Being a bartender in a high profile place like JFD, where seeing celebrities  was commonplace, it just was not appropriate for an employee to go up to famous people and ask for autographs, or drool all over their idols and stammer stupid, incoherent hero-worship-gobbled-goop.

But this was different. Because I wasn’t just a casual fan of Frank Zappa. We had a history…

In 1968, a 16-year-old me was up in his bedroom, in Philly, PA listening to XPN, the  local FM radio station, when the DJ (I’m pretty sure it was Michael Tearson), was playing this unbelievably funny, subversive, anti-establishment, anti-authoritarian – yet outstanding musically – album, in it’s entirety. So, I called the station to ask what I was listening to. I had never called a radio station before, and I was surprised because I didn’t even hear a ring when Tearson’s voice was suddenly on the phone telling me I was the ninth caller and congratulating me, because I had just won the new Leo Kotke album. I thanked him and then explained that I was actually calling to ask what the name of the album was that he had just played. He seemed confused, because I didn’t sound excited at having just won the Kotke album. I thanked him and explained that I just wanted to know what album he was playing.

We were on the air, so I think I may have annoyed him inadvertently.

He told me, it was “‘We’re Only In It for The Money’ by The Mothers of Invention.”

And that’s how I “discovered Zappa. The next day, I bought the album and memorized every word to every song on it. Then I picked up his previous albums “Freak Out” and  “Absolutely Free” . Later, I got hooked on ”Sheik Yerbouti” and “Joe’s Garage”. Nothing was sacred. He skewered everything and everybody. Shattered every stereotype. Years later, he would infamously battle Tipper Gore in Senate hearings over censorship and the labeling of albums with ratings stickers. By the time I was in California, tending bar at Jerry’s Deli, Frank Zappa was like an old acquaintance. I had recently read in the news that he had been losing his battle with prostate cancer and might not be with us much longer. Which made it even more surprising to me when he got up to go outside for a cigarette.

At this time, I was still a smoker myself. It was a mId-November evening in 1993.  The Real Frank Zappa Book was still pretty fresh in my mind. In the book, Frank relates that he is most comfortable in his home studio, composing and recording music. He was not fond of going out in public at all which is why it struck me odd that there he was, sitting in a corner booth across the room from the bar with his whole family… his wife Gayle, and the kids in a place as public as Jerry’s Deli. So when Frank got up and walked outside after dinner, I decided to take the opportunity to meet him.

He had just stuck a cigarette in his mouth, so I lit it for him. Pulling out a lighter like Jesse James pulled out a gun is something i had gotten pretty good at as a bartender. I lit my own and said, “I’d just like to thank you for the work your doing in your fight in Washington against censorship”. His eyes smiled. I think he appreciated that I talked about something that was important to him. We talked about the hearings for a bit and then he asked where I was from. I told him I was form Philly and that I first heard him years ago on XPN and won a Leo Kotke album when I called the station to find out about the Mothersof Invention album. He got a laugh about that. Then he asked me if I knew this guy or that guy, and that’s about it. After speaking briefly about the Philadelphia music scene, he went back to his table and I returned to the bar. Getting to meet and speak with Frank Zappa was one of the highlights of my life.

Frank passed away about  two weeks later, on December 4th, 1993. Thanks to a loving family, and a legion of adoring friends and fans worldwide Frank Zappa’s life was well worth celebrating. Part of his legacy The Real Frank Zappa Book, which I highly recommend to anyone who cares to know more about this truly legendary icon of eclectic and electric music and baby boomer culture.