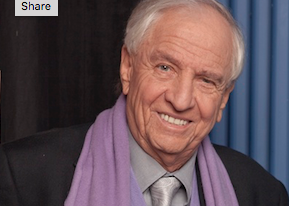 Gary Marshall died on Tuesday, July 19 , in Burbank, Ca. at 5:00 p.m., from complications due to pneumonia after suffering a stroke.

Garry’s infectious humor was a huge part of our teens through television shows that he created such as Happy Days, Mork and Mindy, and Laverne & Shirley.

In fact, thanks to him, we still use the phrase, “Jump the shark” to describe something that’s overstayed its welcome or whose novelty has worn off. The phrase was derived from the Happy Days episode where Fonzie literally jumped over a shark on water skis (Fonzi was on the water skis – not the shark). The scene was so over-the-top unbelievable, people started tuning out in mass numbers. It was just time to move on.

The memories, the achievements, the accolades, and the legacies of Gary Marshall himself, however, will NEVER jump the shark. I never met the man, but the stories and accounts of his persona from people who knew him, met him, worked with him – are mostly testaments to a larger-than-life, gregarious, warm-hearted guy, beloved by all of Hollywood and beyond the star-studded universe to the far corners of the Galaxy. Including Ork.

Shortly after Happy Days “jumped the shark”, Gary introduced a fresh new spinoff, introducing a young Robin Williams and an old favorite, Jonathan Winters (one of Robin’s biggest influences), in a new hit series called Mork & Mindy. In a rather strange twist, young Robin as Mork played dad to Jonathan’s character, a big old baby who hatched from an egg.  I guess you had to be there. Heh heh.

Then there was Laverne & Shirley. I think. Hey, I’m a baby boomer. I’m writing from memory here (what’s left of it). Laverne of course was played by Penny Marshall, Gary’s very popular and talented kid sister. Another star of this show, Michael McKeen (Lenny of Lenny and Squiggy), went on to become one of the members of the cult group Spinal Tap, the band featured in the Rockumentary directed by yet another Hollywood mega-talent, Rob Reiner.

But all roads lead back to Garry Marshall. He leaves behind an enormous, wonderful legion of family, friends and and fans. not to mention a huge void. Garry Marshall shall sorely be missed by many, many people, myself include.

TV SHOWS AND AND MOVIES FROM WRITER & PRODUCER GARRY MARSHALL

The links below are affiliate links that will take you to Amazon.com where you can purchase collections  of TV shows, movies and collectibles.

Mork and Mindy: The Complete Series

Laverne And Shirley The Complete Series by Penny Marshall