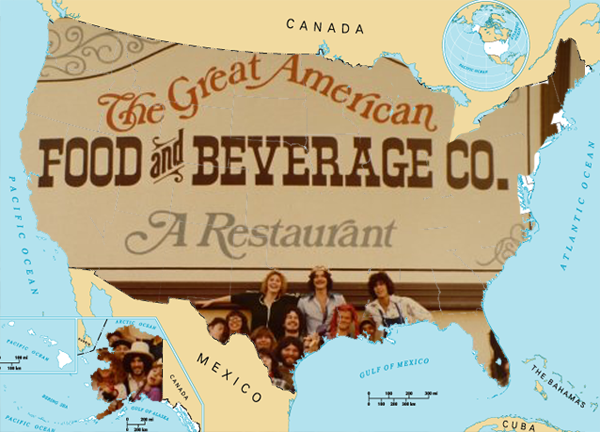 Between 1977 and 1980, I worked as a singing waiter at The Great American Food & Beverage Co. – a place where I had many celebrity encounters and cut my teeth as an entertainer. This is the story of the ride that began that amazing long and winding road of craziness that is my life.

Sh*t Or Get Off The Pot

After the movie Easy Rider was released in 1969, and throughout the 70’s, the entire nation seemed to grow restless, with an urgent need to travel across country and/or backpack across Europe.   Hitchhiking was very common then, and I had my thumb out quite often in those days as a means to get around during my teens. I too had got bitten by that bug.  In 1972, I hitchhiked up to Boston, Mass to live for about a year. That’s another story for another time.  1977 was the year I moved to Southern California to become a rock star. I never did become a rock star, but the weather and the lifestyle kept me there for the next 28 years.

My buddy, Dave (we’ll call him DJ), had moved to Santa Monica in 1974. Back then, it was expensive to call Philly from California, but he’d call from time to time and attempt to talk me into moving out West to join him.  The music scene, the women, the weather, the Pacific Coast Highway… it did sound pretty enticing, but I was rooted here in Philadelphia. I had a full time job, with insurance and overtime pay and raises every 6 months. Who, could leave that, right?

But I was suffocating and I knew it. Before DJ left for California, we were “partners in crime”.  We used to compete for girls by playing our guitars and serenading them in my parents recreation room. Eventually, we formed a duo and played our first open mic together at the Cafe Ehrlangher in the old Walnut Street Theater. Our first song was one of DJ’s originals called “Pearl Diver”. We followed it with the Eagles’ “Desperado”. I’ll never forget the sweat pouring down my face. I was a ball of nerves and pretty much choked that second song. After that performance, instead of singing “Desperado” we changed it  to “Perspiration”. Over time, I became more confident playing in front of a large audience, but to this day, I still get a case of nerves before some gigs.

So where, was I? Oh, yes – 1977. It had been almost 3 years since DJ had moved to CA. I had just moved back in with my parents after living in a two bedroom apartment by some railroad  tracks in Bensalem with my friend, Alan Drazen, the guy who would later become the creator of the Choco Taco for the Jack and Jill Ice Cream Company. So, my family had just sat down to dinner when the phone rang. My mother said, “Let it ring”

Too late. I had already picked up the reciever. It was DJ again – this was about the 5th evening he called while we were having dinner since I moved back  After each call, I would hang up and ponder out loud about moving out there, to join forces once again. Only this time, there was much more urgency in his voice. This time it was, “Hal, you HAVE to come out here as soon as possible!”  He had gotten a job as a singing waiter at the infamous Great American Food & Beverage Company. He described it to me and just painted a picture of this incredible “Disneyland of restaurants”, where all the busboys and waiters had to audition to get a job. They only hired the best of the best and he had been building em up to the manager, who had agreed to hire me if I could get out there. He was living with a beautiful girl in Santa Monica and I could crash in his living room till I saved up enough money to get my own place. The money as great and I’d have my own place in no time. DJ was pretty persuasive and I cupped the phone and looked at my mother whoa been glaring at me while  the rest of the family just sat there without a word, listening to my half of the conversation. Finally, my mother, with double piercing laser beams leveled her eyes at me, and stated loudly, “HAL! You’ve been talking about moving to California for two years already! SHIT OR GET OFF THE POT!!! (Exact words. Ask DJ).  It was the beginning of February and I was about to drive cross country through one of the worst blizzards of the century. 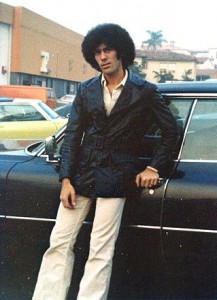 In the 70’s, the NPR station , WXPN here in Philly, had a “Ride Board”.  Every evening, the host would read a list of people offering rides and people looking for rides. I called the station and offered to split gas and tolls with anyone heading to California. I got a call from a guy named Brian who would split the costs as far as New Mexico. It was the best offer I got before I had to make a decision so I took Brian up on the offer.  I had only mange to save up a little over $200. I had a nice big Mercury Marquis with a 429 engine I had bought for $600 at a car auction that a car dealer friend if mine got me into. The interior was roomy and plush. It was like driving across the country while sitting on your living room couch. Smooth ride. Loved that car. Obviously – I’m still thinking about it!

NOTE: DJ is currently  performing live, writing and recording new original songs. Learn more about him on his website DJBarker.com