Here’s my Great American Journey so far… We left Philly, went through Virginia where we encountered giant snow flakes at the sighting of the Roanoke sign. Continued through the Monogahela National Forrest, then through part of the Smokies, had a layover in Nashville where it was 13F below zero, Drove through the night through Arkansas where a stoned hippie disc jockey kept us entertained  for about an hour when the signal finally started to fade. Oklahoma and Texas are kind of a blur. We just took turns driving, chain smoking and stopping occasionally to get fuel, food and use the bathroom until we finally arrived in Albuquerque where we all got high  and I spent the night at Brian’s buddy’s place. After a good night’s sleep in a nice warm place, I was ready go. 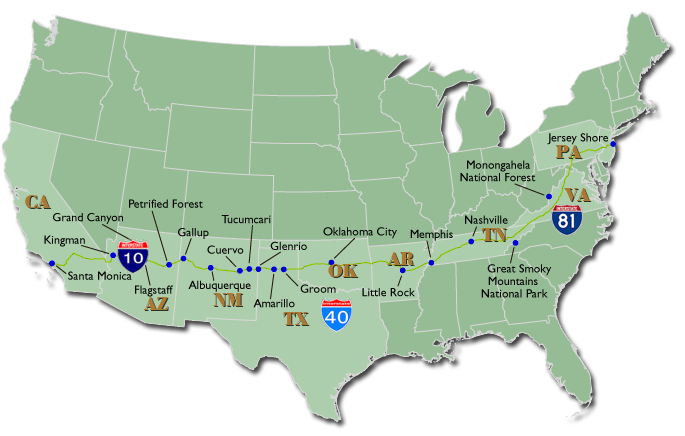 One thing I was concerned about after I left Brian and the guys back at the house, was that, once I set out on the road again, the remainder of the trip was going to be long and boring. Not to mention that, driving alone for the last leg of the trip, I had to be careful not to fall asleep at the wheel… that’s no way to start a career as a rock star.

I was feeling pretty good, though. After all, I had come a long way and was finally in the home stretch! 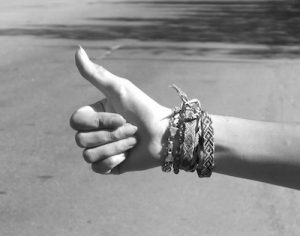 And, as luck would have it, (yes, apparently I was riding with Lady Luck, after all), about 45 minutes after I left Albuquerque, just before the Arizona border, I saw a couple up ahead with a sign that said “Los Angeles. Will Split Gas”.  Being accustomed to having company throughout most of the journey, I decided to  give them a lift into L.A.  They were an Apache and Hispanic couple and their names were Angel and Lucy. I guess in retrospect, they could have killed me, took my car and left me in the desert, but in those days, hitchhiking was still very common and besides, my mind just never went there. My mom didn’t raise me to have any prejudice. Good thing, too, because picking up these two made the rest of the ride a lot more enjoyable. They knew the route pretty well, so when the time came when we were feeling hungry, they knew where to find good inexpensive Mexican food. Me being unfamiliar with their cuisine, I got a hamburger and fries. Always the meat and potatoes man. Fortunately, California changed all that, eventually. Ah, but I digress.

During the drive, the weather never warmed up. If anything, it had gotten even colder. I learned during a rest stop from conversations with the locals that this was a first for Arizona in a very long time, maybe ever. They had never had ice on the road before in as long as anyone could remember. Thus, they had no salt to melt the black ice that was extremely dangerous, because it was virtually invisible to the naked eye.  It lay on the asphalt like a thin layer of saran wrap for miles. At one point, the traffic slowed down to about 2 miles an hour. Slow as we were going, car tires had absolutely no traction and were spinning out of control like bumper cars at an amusement park. Twice, I thought we were going to careen into the car in front of us or next to us, but through some miracle, stopped within an inch of contact.

So close and yet so far away. If it weren’t for this black ice phenomenon, we probably would have been in California by now. And as the traffic slid/crawled/swerved along, my eyelids were getting heavy. Angel and Lucy were passed out in the back and i was falling asleep at the wheel.

Guardian Angels of the Highway

Make that FELL asleep  at the wheel. Fortunately, a truck driver in an 18 wheeler was behind my car, realized I was drifting and leaned on his horn to wake me just in time to wake up and regain control of the car. Then he flashed his lights in acknowledgement and I flashed mine on return. I ha heard in my travel that truck drivers were guardian angels of the highway. Now I found out first hand why. The truck driver behind me followed us and honked a couple more times before we got  through all those miles of iced-over blacktop. Wouldn’t that be crazy if it was the same truck driver who got me through the Smoky Mountain pass? Hey, could happen.

Eventually, the traffic dissipated, the highway opened up, the air was becoming warmer as if by magic and the entrance to Hotel California was finally in sight!