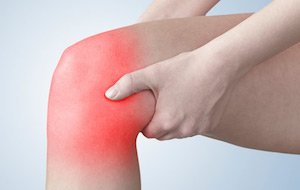 The First Time I Heard About Glucosamine
Ever since i was in my twenties, I’ve experienced problems with my knees. It probably started when I was selling shoes as a teenager into my early twenties. That constant bending down to measure foot size, retrieving the box from the stockroom, bending down again to help the customer on with their choice of footwear, rinse and repeat all day long, six day a week. Eventually, I ended up having knee surgery for a torn ligament.

Fast forward years later after years of physical work… serving food and beverage in bars, restaurants and hotels, performing live music, schlepping lots of equipment up stairs, downstairs, over sand, rocks and grassy knolls. It takes it’s toll on ones knees. My guitar playing had begun to take its toll on the joints in my fingers.

One day, my girlfriend at the time told me I should try Glucosamine. Except it wasn’t for me, it was for my dog.

Max was a Golden Retriever I owned at the time. He was getting up in years and chasing the ball or jumping into and out of the car was beginning to become difficult for him. The vet wanted to prescribe Rimadyl, a controversial drug that some blamed for the death of their pets because it was reputed to be extremely hard on the liver. My girlfriend suggested Glucosamine because it was a natural supplement with little to no side effects.

Meanwhile, I had been experiencing pain in my knees at the bar I was working in at the time. After working an 8 hour shift, I had to restock the bar, hauling cases of beer and booze from the storage room out to the area behind the bar where the beer cooler and shelves were located. Once again, I found myself kneeling and standing repetedly, to get the side-work done. There was a floor safe in the office and when I bent down to put the money away, my knee would lock, and it would be very painful trying to stand up again.

So at my girlfriend’s suggestion, my beloved Max and I both started a regimen of daily Glucosamine supplements at the same time.

How Long Does it Take For Glucosamine To Work?

After about a week, I hadn’t noticed any difference. I told my girl that the supplements were just a joke. A placebo. If it was working for all these people that were raving about it, I wasn’t one of them. She told me to keep taking it. It takes a couple weeks for the body to respond to some supplements. I had previously had great results with other supplements for different things, such as ginseng and vitamins, so I agreed to continue to take daily doses of Glucosamine and see if a little more time would yield any result.

Do Glucosamine Supplements Really Work?
Sure enough, about a week after that conversation, I was putting the money away at the end of a long, strenuous night. When I went to stand up, I didn’t notice the usual pain. And what’s more, I had immediately noticed that I didn’t notice any pain. Over time, I continued to monitor the pain in my knees. or lack thereof, and sure enough, the pain and swelling had subsided significantly. I decided to stop taking the Glucosamine, and sure enough, the pain began to return within a week or two. So, I went back on it and continue to take it to this day.

As for Max, I got Glucosamine for dogs. He began to show improvement as well. After about a month, he began to act almost as playful and energetic as he was as a puppy. So if you have an older dog who needs a little help with the old joints, look into glucosamine supplements for your pooch, too.

Liquid or Tablet?
I’ve tried several brands of Glucosamine, and for me, it’s really simple. There is only one brand that I find outshines them all and they make both tablet and liquid versions. I personally prefer the liquid. Hands down! It tastes great, it’s potent and goes down easily.

What is the Best Brand of Glucosemine?
There are several pretty reputable products, all do the job pretty well. But like  I said, for me, there is one that stands out above the others.  Drum roll please……………………………..
Wellesse Joint Movement Glucosamine With Chondroitin & Msm GreatItems 2Pack (33.8 fl oz )

Where Can I Find A Good Glucosamine Supplement?
You can find good glucosamine and other joint pain relief products wherever vitamins and supplements are sold. For your convenience, there is a link to Wellesse and other products for joint pain provided on this page.

If you have any comments or stories about how glucosamine helped with your joint pain, please share in the comment section. Thanks!