No, not another sequel to Poltergeist… We’re talking about the The Rolling Stones!

I remember the day I left Van Nuys, CA in 2005 to move back to my hometown of Philadelphia, PA after what I often refer to as my 28 year vacation in California. My friend Gray handed me a giftwrapped CD after having spent the entire day helping my brother-in-law load the truck with all of my worldly possessions. I knew it was a Bruce Springsteen CD, because Gray and I were and still are hardcore Springsteen fans, and I was looking forward to listening to some Bruce along the way down Route 66. 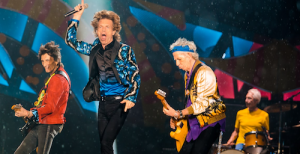 The Rolling Stones have announced their new blues album ‘Blue and Lonesome,’ their first studio album in over a decade.

Once we were out on the expressway, I tore off the wrapping around the jewel case, to reveal an unexpected but delightful surprise. Gray had gifted me not with Bruce, but with the latest Stones album, Bigger Bang. It turned out to be one fo the best things they ever did up until that point, and its poignancy wasn’t lost on us either, as the title track was a not so subtle verbal attack on then President George “Dubya” Bush and his cabinet. We had left the west coast a week after Hurricane Katrina struck, and were part and parcel to its aftermath as we crossed the country. Price gouging at the pumps was the most noticeable impact for motorists. But the good side of human nature was also apparent when we stopped to rest at hotels or motels along the way, there were many taking in the storm refugees for free or very little cost.

But the one thing that consistently kept up our spirit and helped keep us awake and focused during thos  elong stretches wher we couldn’t tune in any radio stations was the Rolling Stones Bigger Bang CD. Still one of my fvorites to this day!

Truth be told, I thought that was going to be their last one, ever. I mean Keith Richards is going on what? 214 years old?  Still can’t imagine what keeps that guy hanging in there! Just glad they’re all still around to put out this latest offering.

What It Is
This latest upcoming holiday treat is a rollicking, authentic blues album. All covers, just like when they first started. We’ve apparently come full circle. Every song a classic blues song written by the masters: Howlin’ Wolf, Little Walter, Willie Dixon, etc., featuring a guest guitarist Eric Clapton and co-produced by Don Was. Scheduled to be released in December… As Elvis might say,… it’s gonna be a Blue Christmas.