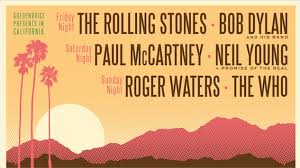 This is what the British Invasion has ultimately led to. The headline on the My News L.A. website reads, “McCartney, Jagger, Dylan Rockin’ in their 70s: ‘Oldchella’ Tix On Sale…”

OLDCHELLA?!! Man that hurts. Yeah, I know we baby boomers have gotten up in years but, let’s face it… Seeing it in wrtiting – a rock concert featuring the likes of Paul McCartney, Mick Jagger, Bob Dylan and Neil Young billed as “Oldchella” – now that is sobering. Seems like just Yesterday, Paul McCartney was singing, When I’m Sixty-Four, and it probably gives Mick Jagger no Satisfaction at all to hear Neil Young singing, “…it’s better  to burn to than to fade away”. In the words of Mr. Tambourine Man himself… The Times They Are A-Changin’

Well, I’m here on the East Coast and I have no plans on making the trek to this promising upcoming desert concert, but I am happy for those that will be making it out to the show. I can just see it now. A VH1 news reporter on the scene interviewing some old geezer:

In the meantime, Paul better start working on, When I’m Ninety-Four. We already still need him and he’s apparently able to feed himself. 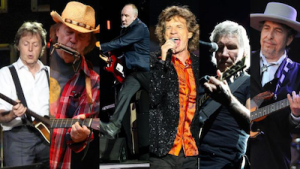